A previously unrecorded solstitial sunset brightens up an evening on a Pennine moor. An archaeo-astronomical site described by John Billingsley (images) and David Shepherd (text) 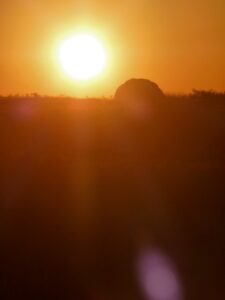 This composite feature was described some time ago (Shepherd 2007, 2014), the essential point being that the new, midwinter sun appeared to rise / be born from the vulvaic Miller’s Grave, from the point of view of an observer at Robin Hood’s Penny Stone – the names are post-medieval and are retained for convenience.1 Recently John Billingsley and Akiko Kuroda made an observation in the opposite direction, since midsummer sunset at our latitude is at 180° from midwinter sunrise.
The images show the setting sun ‘rolling down’ the side of Robin Hood’s Penny Stone. Thus there is, demonstrably, a reciprocal sighting of the sun at contrasting solstices, something noted frequently in megalithic contexts, but not previously at this location. The ground between the Penny Stone and Miller’s Grave is not level; the gentle slope SE includes a notched far horizon beyond the Miller’s Grave, whereas, in the opposite direction, the Penny Stone is skylined at around 200m distance. 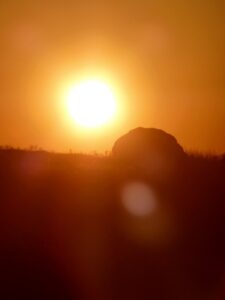 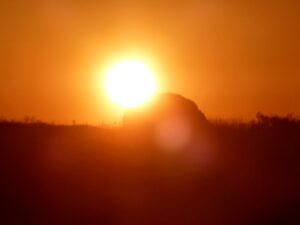 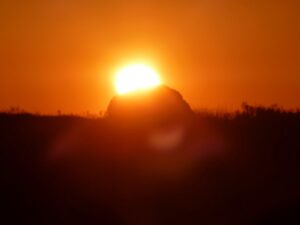 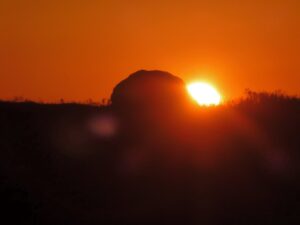 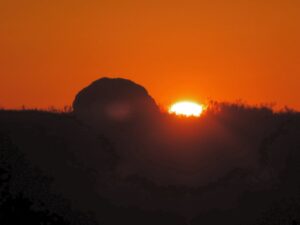 The two stone ‘labia’ at the centre of the Miller’s Grave are not oriented to any obvious solar or lunar horizon event and it may be that this is a natural outcrop that was utilised – and perhaps originally ringed rather than built over – because of its suggestive appearance. It is possible to infer a sequence in which this feature may have been constructed, which would be predicated on prior knowledge of the solar cycle, a prior belief in its importance and an appreciation of the necessity to memorialise it. Further, recognition of the central feature of Miller’s Grave as vulvaic must have related to apprehension of this feature as a symbolic indicator standing for a pre-existing myth or sense-making of the behaviour of the sun. Because of the spectators’ position looking into the sun, the photographs do not show that the sunset probably also throws the shadow of the Pennystone upon this internal feature of the mound, with all the potential ‘fertilising’ symbolism this implies; this needs to be confirmed photographically at a later date. 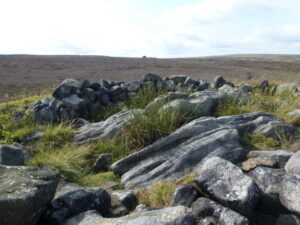 Subsequent to that recognition must have been the location of the Penny Stone. Clearly, any marker stone would have sufficed for a one-way sighting; to elaborate this to work both ways at the solstices is more complex. The Penny Stone and the Miller’s Grave are within shouting distance and placing a stake to secure the position of such a stone would have been straightforward.
The observers of the summer sunset (JB, AK) stood on the southernmost side of the bank built to enclose the vulvaic stone/s, looking directly across the centre, to record the solstitial images. It would follow that the original designer/shaman would have stood in the same place to direct the placing of a sequence of poles tracking the downward trajectory of the sun. Once the path toward the skyline was established, a stone reflecting the same line would be required. 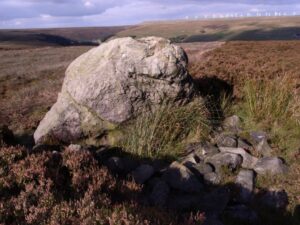 There is no clear indication of shaping on the Penny Stone – which weighs at least 6 tonnes – so perhaps the required line was recorded and a stone sought that could reflect the angle of descent. The Penny Stone is of Huddersfield White Rock, which outcrops some 250m away to the SE. The outcrop is naturally degraded and there are several loose blocks and slabs.
Without excavation it is difficult to be more precise about the process of construction of this unique feature. There is no dating evidence, but megalithic manipulation of this order is usually associated with the arrival of a Neolithic group. Work across Europe on ancient DNA is proceeding apace, and the current view identifies two main strands of arrivals over (say) 200 years, coasting up the Irish Sea and the North Sea then following major rivers inland. There is little other evidence of an established Neolithic presence in upper Calderdale, and it may be that this particular group proved unsustainable in the longer term. 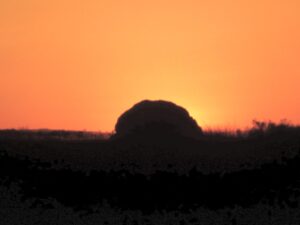