A new ‘tradition’, or a new artefact?

Members of the NEReaders subscribers’ e-group in 2005 discussed what appears to be an increasingly ubiquitous feature of country parks, especially along paths near rivers. The topic – ‘coin trees’, or, more accurately, ‘coin logs’ – involves what seems to be an example of evolving folklore – or possibly ‘folklorismus’.

The initial enquiry concerned a sawn section of fallen tree across a stream near the Storiths road on the Bolton Abbey estate, N Yorkshire. The bark of this log is studded with coins, mostly pennies, and evidently constitutes something of a custom; one correspondent noted that none of the visible coins seemed to be pre-decimalisation, hence the custom could not predate 1973, while another correspondent had recently been intrigued enough to contact the estate office about it. The reply (Moira Smith, 26-10-05) was that when the fallen tree was made safe and pulled off the path, about 15 years previously, one of the foresters had found a coin and pushed it into the bark. This is now not the only coin tree on the estate, and reports of others continue to come in. The modern ‘offerings’ are usually copper coins of small denomination, typically pennies.

A news piece in the Hebden Bridge Times (1-6-06) told the story of a similar tree or trees in Hardcastle Crags, a National Trust estate near Hebden Bridge, West Yorkshire. In the article, Samantha Nugent confessed that she’d pushed two coins into a similar sawn-up trunk by the riverside there, while wishing for a job as a dental nurse – and got the job. She now calls it the Wishing Tree (and it is not to be confused with another Wishing Tree in the valley, popular among young visitors before World War II, which was a tree where one branch had twisted back on itself to form a ‘bower’). Subsequently, however, the log had sprouted coins just like the Bolton Abbey example, and the custom has spread to several other logs nearby. Was it Samantha’s initial act that started this coin tree activity? Or has the custom taken off at Hardcastle Crags under the influence of the earlier coin tree at Bolton Abbey (both areas are similar landscapes)?

Following these locations, reports came in of two more coin logs on the Ingleton Waterfall Walk (N Yorkshire); one mailer remembered one there in the mid-1980s. At least one more is to be found along the Swinsty Reservoir path in North Yorkshire, and three years ago in Dovedale, Derbyshire, I came across another. Recently, I came across another in South Wales, again at a popular and waymarked walking spot. The Bolton Abbey coin logs now feature on a postcard as a children’s ‘I Spy’ kind of game.

I have now become so used to seeing them on streamside paths in managed estates that I barely notice them – perhaps that is because I have a certain suspicion concerning this little ritual.

Who, I wonder, is it actually inserting these pennies? The options are, it seems to me: 1) passing individuals. Do they see the tree and wallop a penny into the wood with a handy stone? Or do they come deliberately, armed with a hammer, perhaps to make a wish, like Samantha? 2) Staff members at the locations. I have yet to come across a coin tree at a location that is not a country park or similar tourist attraction. The coins seem often to be hammered in quite regularly, as if a number are inserted at one time, rather than the haphazard arrangement one might expect if the act was spontaneous observance. The artefact then becomes a feature in its own right, one of the attractions of the place, attractive perhaps to children, and open to benign exploitation as at Bolton Abbey – and then feeds back into the public and replicates elsewhere, i.e. a manufactured tradition.

The answer is probably somewhere in between the spontaneous and the cynical interpretation, but the practice certainly draws on fertile roots of making offerings to ‘wild’ or quasi-wild places. They may be a contemporary heir to the charity ‘wishing wells’ that I often saw in the 1950s and 1960s (Hardcastle Crags still has one of those, too), which themselves draw upon the age-old urge to offer coins to fountains, wells, etc. – with one crucial difference: the coins in these logs cannot be recovered, as they are damaged beyond use. That certainly hearkens back to older traditions of deliberately breaking an item of value, such as a sword, offered to a votive site, or of more recent beliefs that a crooked sixpence held more talismanic virtue than a functional one.

A variant on the ‘coin log’ theme is a large living tree in the grounds of Ulverston Buddhist Centre in Cumbria, whose bark is similarly studded with coinage. This recalls similar traditions at certain sacred trees in Shinto shrines of Japan. In both places, the coins are invested with a spiritual intent.

We welcome reports of other coin logs or trees, and of course of any background information or lore concerning them; please let us know of any others you come across.

I think we have a ‘tradition’ which was contrived in the first instance in many popular locations, quite possibly inspired by similar customs in other countries or by random occurrences here – it would be nice to identify some ur-coin trees! But now there are the penny-studded logs in popular tourist sites, I think we can expect both more contrived trees and more spontaneous creations. I’ve some photo’s on my Blog of the trees on the river Doe side of the Ingleton water falls walk. I’m sure this is too regular, a pattern, to be random odd wishes. 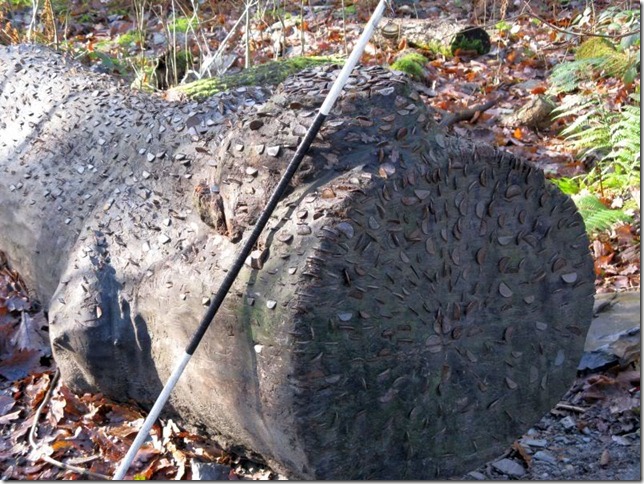 THE MAGIC AND MYSTERY OF COIN TREES: From Religion to Recreation

In 2006, NE published the first of a string of snippets on coin trees, one of a number of ‘new traditions’ that have sprung up around the developed world. The tree that had sparked my interest a couple of years earlier was in the Bolton Abbey estate in W Yorkshire; and a few years before I got there, the then 12-year-old author of this book had encountered it too, and had her fancy first taken by folklore.

A common error is to assume folklore is something in the past, or dying out. Coin-trees, along with love-locks, the subject of Holbrook’s next book, disprove that, while also underlining how rituals like these acts really are might sound very grand and serious in a historical assessment, but can be very mundane and light-hearted.

But there’s plenty of depth when you get down to thinking in more detail. You can try and see what the earliest coin there is – that might give you a date, and certainly reveals that coin trees (more accurately, logs) are pretty recent, 85% post-1990, 50% post-2000 (“The majority of coin-trees are unanchored to the past”. 78). You can investigate other traditions in the vicinity, involving trees, perhaps, or deposition of coins or iron – a practice with ancient forebears. You can watch and see who is pushing a coin into a tree, who they’re with, and with what – adults with kids or young couples, nearly all tourists, with a nearby rock rather than a hammer they’ve brought with them aforethought. Coin trees are familiar today – but nonetheless appear as a surprise on a walk. What do people hope to achieve? Luck is a common wish, also healing, like rag-trees, but sometimes, thanks often to parents making up stories on the spot, the coins are an offering to the fairies. Few coin-studded logs have a pre-existent tale; many have been opportunistically left by a trail in a rural tourist site as a feature, aided by a change in conservation policies to leave dead wood as a valuable habitat – which means, of course, that they will in time decay into a heap of rusty metal, unless, as happened with one in Hebden Bridge, some desperate villain (a rival tourist site?) nicks it.

It is the surprise element and the rapid creation of backstory, though, that indicates that however ebullient the practice of these contemporary rituals are, they do not build on a foundational awareness of folklore in the population at large. Although these are not survivals or revivals, they do not emerge from a vacuum. How many depositors – apart from self-aware types like antiquarians, folklorists and neo-pagans – relate their act to say the folklore of iron, the ancestry of votive traditions? But is this awareness  changing because of things like coin-trees, lovelocks and the recent fashionable attention to ‘witch-marks’?

The author has spent many hours hanging about at 40 identified sites all over the British Isles, asking visitors their thoughts, assessing their ritual, touristic and aesthetic context, and then writing up field notes and a highly considered academic contextualisation that is laudably readable. I would like to think a refreshed sense of folklore is growing in contemporary society, and it is through a younger generation of folklorists like Houlbrook that the fire is there to be rekindled: “The coin-tree proves that while folkloric practices may ebb… they are well equipped to adapt, acclimatise and re-emerge” (252). [JB]