The Langdale Pikes, in the Lake District, were the site of a Neolithic axe factory whose products were prized all over Europe. Its remote location raises a number of questions, among which is how travellers made their way through the difficult landscape. Gabriel Blamires suggests that some of the ancient waymarkers can still be found in the mountains

Many NE readers will have travelled the picturesque Lake District route from Ullswater to Windermere via Kirkstone Pass. Even the most time-pressured business traveller, motoring the A-road over the pass, will have noticed the eponymous Kirk Stone towering up at the northern brow. Wordsworth, who travelled the pass many times, speaks of “This block – and yon, whose Church-like frame gives to the savage pass its name…”

Is it just a natural phenomenon? I’m not so sure.

The Kirk Stone makes its main visual impact when approached from the north, the Ullswater and Patterdale direction. It stands, not in the centre of the pass, but at its very northern edge. This means that it becomes visible to a traveller approaching from this direction some way before reaching the top, as a pointed stone peeping over the ridge. To appreciate it fully, park (if you’re driving) in the car park (Red Pit) on the right a little before the summit of the pass, and walk on up to the top on this side of the road. As one approaches the Kirk Stone more closely, a top ridge can be seen on the stone, pointing up to a well-defined point aligned in a direction WSW. The main leaning surface slants this way, which leads to Ambleside at the head of Windermere – and routes onwards west, including Great Langdale. The stone stands about 3m high, 3m deep and nearly 2m wide.

From the other, southern, approach to the pass, the stone does not come into view at all until one arrives right on top of the pass, ready to descend the other side. From a south-westerly approach along the pass, it at first shows an irregular upright face and blunt rounded point aligned in a NE direction. However, if we move round a little to a southerly viewpoint, it now displays more of a top point, aligned due north up its roughly ridged top. This way lie the rock art panels in Patterdale, and a natural onward route to some great prehistoric features – the Late Neolithic henges south of Penrith at Eamont Bridge, Mayburgh and King Arthur’s Round Table.

If the stone has arrived in this upright position as a result of the forces of nature, the upright posture and significant directional alignments are curious. Could it have been manhandled into position by prehistoric folk?

Another substantial stone in the pass brings us to the main theme of this article – twin pointed stones. About 40 paces SSW beyond the Kirk Stone in the top of the pass, a conspicuous and distinctive stone with twin upper points leans back against another block, as though deliberately placed in that position. This stone is again of considerable size, at 2.5m high. Its twin points suggest a SW direction, down The Struggle to Ambleside, and the way past the head of Windermere again.

Did this stone fall naturally into this position? Or did Neolithic people prop it up on purpose as a waymark? For anyone arriving from the north at the top of Kirkstone Pass, with no roads and no modern signposts, the way ahead is ambiguous. Carry on south and you arrive at modern Windermere town, down the eastern side of the lake. These two conspicuous stones point a way veering west of south – a key route to anywhere west of Windermere, past the head of the lake. In particular, ancient travellers needed to take this route to make for the important Great Langdale axe chipping sites.

Down The Struggle, and past the head of Windermere, about half a mile from Ambleside on the A593 to Coniston, we arrive at Clappersgate. The B5286 is signed left to Hawkshead. Opposite the junction here, a public footpath leads up the low fell called Loughrigg. There is some room to park a vehicle a little way down the B-road on the right by Brathay Pool.

The path winds up in the shade of the wood, and then emerges onto open brackened fellside. A substantial and unusual double-pointed stone is conspicuous a little way up the path on the right-hand side. Nearly 3m high, it stands propped up on a lower boulder, between a cliff edge below the path and a crag above. When approached up the path from Clappersgate, it presents a dramatic, twin-pointed profile, the two top points aligned side by side so as to point due west – the way along the side of the River Brathay valley towards Great Langdale.

Again, it is of course just possible that this stone could have arrived in its present propped-up position as a result of natural forces. However, this would be even more surprising than the Kirkstone and its companion. On the face of it, it seems more likely to have been manoeuvred into position by human hand, although we do not have scientific evidence one way or the other.

The stone stands on a natural route leading diagonally up the hillside. For travellers approaching from the direction of the lake, it looms prominently ahead, in front of a crag. It could have provided a conspicuous landmark for ancient travellers making for the Great Langdale axe chipping sites, either up Windermere, or from the east, the way we have come.

As you pass close by the stone along the path, it reveals a sort of stretched lozenge profile, with a second upper point shadowing the first behind, taking on the appearance of Siamese twins joined side to side – hence the name I have given to it.

For our third stone, we move on up the Great Langdale Valley to New Dungeon Ghyll Hotel, below the Langdale Pikes. Here, footpaths set out from the large National Trust car park, up beside Stickle Ghyll towards Stickle Tarn, nestling below Pavey Ark high above. The paths go up by a succession of pretty waterfalls, culminating in long spidery falls below Tarn Crag.

Above the waterfall, two spaced large stones stand out amongst cobbles on the west side of the gill. 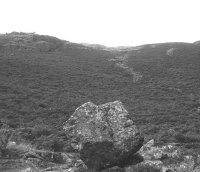 The westerly one, perched on cobbles, is a substantial block 2m wide and 1.8m high. When approached from the SE, it presents a nearly vertical face, slightly stepped, and a twin pointed top profile pointing WNW up to a dip in the ridge above. The triangular profile of another stone stands out blackly on the ridge in the distance, providing a foresight in this direction. This way lie the Harrison Stickle axe factories, and across Dungeon Ghyll beyond, the Pike o’ Stickle factories. Here we have the possibility of a third twin-pointed stone acting as a directional indicator to the axe chipping sites.

We have identified four conspicuous stones all aligned in a direction which could have guided travellers from the Penrith henges to the Great Langdale axe factories. The Kirk Stone itself, and another twin-pointed stone on Kirkstone Pass, have points aligned down to the head of Windermere at Ambleside. A little past the head of the lake this way, at Clappersgate, another twin-pointed standing block points the way west up Great Langdale. Then, beneath the Pikes themselves, at the Stickle Ghyll waterfalls, the twin points of a third such stone seem to point the way up a dip in the ridge to the Langdale Pikes axe factories.

In many explorations into the Lake District, I have come across such substantial upright twin-pointed stones only rarely.1 All the stones described here occur at strategically important points on natural communication routes. From an easterly approach, the distant Pikes present a distinctive double-pointed profile – Harrison Stickle to the right, and the Pike o’ Stickle/Loft Crag ridge to the left. Were these twin-pointed stones ancient waymarks to the twin peaks of the Langdale Pikes – or are these repeated orientations just a curious coincidence?

I have detailed these and a number of other possible route marker stones in my book, Guidestones to the Great Langdale Axe Factories: Ancient ways to stone axe working sites in the English Lake District, ISBN 0 9550270 0 4; £10.99 from bookshops & The Megalithic Portal website.