Japan’s indigenous quasi-pagan religion, Shinto, has preserved sacred space in city and countryside, in many cases since prehistory, and the result is some of the most powerfully numinous places that one will encounter. Here, Richard Thornhill writes of such a shrine in one of the world’s most urbanised environments

Hakusan Jinja is considered one of the ten most important jinja (Shinto shrines) in Tokyo [1], but it is neither a really famous place nor a grand building. However, I think it one of Tokyo’s most beautiful jinja. It is about 3mls N of the centre of Tokyo, on the low hills which rise above the drained swamps on which the city is built. At the top of a steep bank, it must have been an imposing position in ancient times.

People then clearly thought so too, as they placed a kofun (burial mound) here, one of a large number built during Japan’s late prehistory and early history (250~650 CE). The majority were superficially similar to British round barrows, but some, such as this one, were keyhole-shaped [2]. 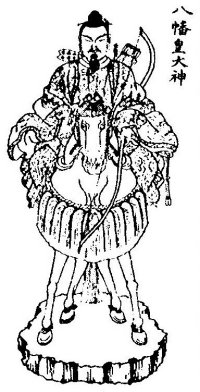 There are no historical records about the site until 1051, when the warlord Minamoto no Yoshiie, nicknamed Hachiman Taro, ‘founded’ a jinja here and dedicated it to Hachiman, the god of war [1]. Much of the spread of Hachiman worship was because he was adopted as the tutelary god of the Minamoto clan [3], and Hachiman Taro then ‘founded’ Hachiman jinja at twelve-mile intervals during his campaigns. However, most of his sites were ancient burial places: among those in Tokyo, Usa Hachiman Jinja is next to a kofun [4,5] (mounded tomb) and Ana Hachimangu is above a cave-tomb in which money-offerings are still made [6]. These sites therefore probably already had sanctuaries of some sort.

Hachiman was originally Ojin, a semi-legendary emperor and invader of Korea, who lived sometime between the 3rd and 5th centuries [7,8] and was deified after death. It is easy to see how the kofun of warrior-chiefs could be linked with the worship of a warrior-emperor, especially as Ojin’s kofun in Osaka is the second biggest in Japan [9]. Furthermore, the Hachiman cult was from a very early date connected with shamanism [10], and it is therefore easy to see why Hachiman jinja were often built on kofun.

Until 1655, the Hachiman jinja stood here alone, but Hakusan Jinja was moved here at that date, and Hachiman’s was relegated to a subsidiary role within the hallowed ground. Hakusan Jinja was moved from half a mile away, where the land was to be used for the shogun’s medicinal herb garden (now Koishikawa Botanical Garden). Before 1616 it had been in Hongo, a mile or so in the other direction, where it was founded in 948, so it seems to have swung like a dowser’s pendulum. That it finally settled here is not surprising, as numerous other kofun have Hakusan jinja or are named Hakusan [11,12]. Hakusan jinja are dedicated to the trinity made up by Izanami, Izanagi, and their go-between Kukurihime [13]. According to the oldest Shinto texts, Izanami and Izanagi are the primal couple [14,15], and, in a myth reminiscent of the Greek accounts of Hades and Persephone and Orpheus and Eurydice [16], Izanami descended into Yomi (Hades), and was visited there by Izanagi, but could not leave because she had already tasted the food [17]. Like Persephone, Izanami then became the goddess of Yomi, returning to the earth during summer, but having to spend every winter in Yomi. It is not surprising that the worship of such a goddess should be attracted to a kofun. Furthermore, the Hakusan jinja probably began with mountain-worship, as the oldest and most important one is at the foot of Mount Hakusan18, and it is easy to imagine an unusual small hill such as a kofun representing the mountain. 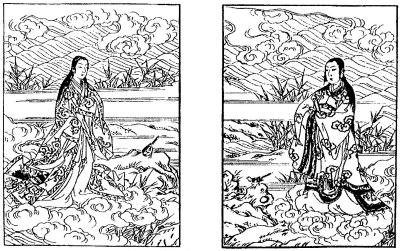 During the Edo Era (1603~1868), Hakusan Jinja was favoured by the ruling family, and made the geomantic guardian of the NE approach to Tokyo, this being the most dangerous direction. The square end of the kofun, containing no bones, was removed to make way for a garden, this now being a children’s playground [19].

The next form of worship to be attracted here was that of Sengen or Asama, the goddess of volcanoes, who is believed to live in Mount Fuji. Asama is a folk goddess, but is identified with the classical goddess Konohanasakuyahime, probably because Konohanasakuyahime gave birth inside a burning hut [20] and thus symbolises volcanoes. Asama has also been identified with the Buddhist bodhisattva Kannon. Jinja dedicated to Asama are found throughout eastern Japan, and most have some connection with Mt Fuji, being on its flanks, or somewhere where it can be seen, or on or near a hill in some way resembling it [21]. Many are also on kofun, and it is easy to see the validity of such a site, both because of the resemblance of kofun to miniature mountains and because Konohanasakuyahime was a divine ancestor. 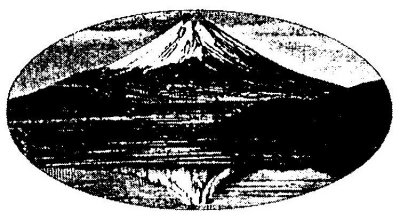 In the 16th century, Asama worship evolved into the ritual climbing of Mt Fuji, and the Fujiko (Fuji-associations) were organised. These were groups of people who used to climb Mt Fuji, wearing white robes and chanting, at the end of June every year. The activities of the Fujiko intensified in the late 18th century, probably because of the need to propitiate Asama after the 1783 eruption of Mt Asama, which killed about a thousand people and produced such a quantity of ash that millions perished in the famine due to the resultant poor summer. Another reason for their popularity in that era was the influence of the ethnocentric National Studies Movement. Konohanasakuyahime was the ancestress of Jimmu, the first emperor [22], and it was therefore perhaps natural that her worship would take on nationalistic overtones.

In 1780, the Fujiko at Takadanobaba, N of Tokyo, carried blocks of lava back from Mt Fuji, and used them to build a mound next to Mizu Inari Jinja [23]. The Fujiko in nearby areas then built numerous such fujizuka (Fuji-mounds) over the next few decades, enabling members to climb fujizuka as ritual substitutes. I suspect that these were originally imitation kofun, because several kofun had been called Fujizuka for centuries [24], and Mizu Inari Jinja itself was on a kofun. The Fujko started to decline in the late 19th century, when rail travel facilitated climbing of the real mountain, and most were disbanded after World War II, largely because of their ultranationalistic ideology. However, dozens of fujizuka still exist throughout eastern Japan [25]. Very little has been written in English about them, and this would warrant extensive research in its own right, as the iconic representation of a mountain seems almost unique.

The Hakusan Jinja kofun was already called Fujizuka, and in 1826 the Fujiko built a hokora (small jinja) on the summit [25]. It is now open for climbing for two weeks a year, from June 30, and this is also when Hakusan Jinja’s annual festival is held. This season is when hydrangeas are in blossom, and the fujizuka is planted with these shrubs, suggesting Konohanasakuya-hime (‘Tree-Blossom Princess’). It is an attractive sight to see the kimono-clad worshippers climbing the steps between the blossoms, with the noise of street performers and the smell of grilled squid and soy sauce wafting up from the festival.

One day I met the priest’s wife weeding the fujizuka. Suspicious that this nosy foreigner might be an archaeologist, she insisted that the kofun must never be excavated. I told her I couldn’t agree more: I fail to see the difference between archaeologists and grave-robbers. I hope that the kofun is still unexcavated in a century, overlooking swamps where eel-catchers punt between the ruins of office-blocks.

19. Conversation with the priest’s wife at Hakusan Jinja.