Jake Kirkwood reviews an e-book project and suggests it raises issues for development in earth mysteries and neo-antiquarian work. 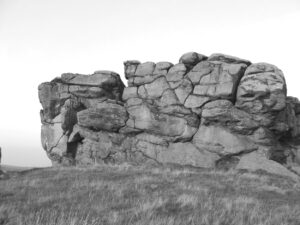 If like me, you are somewhat reluctant to read documents of any length in electronic form, the first thing to say about this e-book is that it is technically accomplished, and works well in terms of readability. I did not, contrary to my expectation, find reading it on screen a trial. In fact, it’s not just readable, but very attractive, well laid out and impressively illustrated. It’s a shame that the high production values mean that producing a hard copy which would do justice to it would be prohibitively expensive, meaning that this version is the only one which is likely to be produced.

The book consists of a series of themed sections bringing together material from a range of sources concerning Almscliffe Crag, near Harrogate in N Yorkshire, along with accounts of the authors’ experiences while exploring the place. These are followed by three pieces of creative writing inspired by the Crag. A final section consists of an interview with the farmer on whose land the Crag stands. It has to be said from the outset that the creative writing is the weakest part of the enterprise, and arguably the work would be stronger without it. However, by placing these pieces after the main body of the text, the authors have ensured that they can be skipped easily.

Among the topics covered are the use of the Crag – or in particular a rock basin on its summit which is often filled with rainwater — for wart removal, made all the more evocative by the fact that the Crag’s appearance has been likened to a wart; the fact that the fissure dividing the Crag forms a boundary not just between two landowners, but to two opposing sides in the campaign against slavery (the Lascelles and Fawkes families); and an account of explorations of the mysterious ‘Fairy Parlour’ concealed inside it. The history, legend and folklore of the place are reviewed in some detail.

What shines through, and would make the work charming even if it had less depth, is the fact that the authors have spent considerable time at Almscliffe exploring it in both real and inner space. They remind us of what it is to approach a site as somewhere to come back to again and again, and experience it on many levels and in many conditions. At base, this is a labour of love.

Most usefully, the authors of Almias have scoured the available material both conventional and speculative on the history of Almscliffe and brought it all together so the rest of us don’t have to. For this, if nothing else, the book is highly recommended. It has to be said that although some sources are approached critically, notably the Victorian clergyman Henry Simpson’s lurid fantasies of blood-soaked Baal worship, others are quoted without the qualification that they perhaps need for the general reader.

Worth noting is the inclusion of the contribution of climbers to the mythos of the Crag. Those who have read M. John Harrison’s novel Climbers will be aware of the fact that this group of people have an ongoing direct and intimate relation with landscape features like  Almscliffe, but this is rarely if ever noted in earth mysteries publications or discussions1. It’s also good to hear the voice of the landowner, whose contact with the land is naturally stronger and more frequent than anyone‘s.

In the longer term and wider context, more important even than the service they have done by creating a useful site guide to Almscliffe is the authors’ decision to employ psychogeography as a tool for an e.m.-type project. Almias would be impressive were it only a conventional e.m. text collating lore and legend, but the psychogeographical perspective offers a new approach at a time when this is sorely needed in earth mysteries.

Difficult to summarise, but traditionally concerned with urban environments, psychogeography has its origins in the revolutionary artistic currents which burst into spate in May 1968, and is conceived as a way of finding the meanings of places. It has since been adopted by a wide variety of artists, geographers, radicals and intellectuals as a technique. Some readers will be familiar with its use by Ian Sinclair and – less usefully – Will Self2.

At the time that Almias was published online, there was a debate on the NEReaders Google Group about where earth mysteries should go from here, and how it should go there. Utilising elements of psychogeography had been strongly featured among the suggestions3. How interesting, then, that the authors say “It may be suggested that psychogeography and ‘earth mysteries’ are two sides of the same coin” and continue “We suggest that the aesthetics of traditionally urban psychogeography … have a significant part to play in engaging with the rural landscape. Consider seriously the way you ‘make meaning‘ from your environment: all places are locks behind which deeper and more personal meanings are found”. One hopes that this work will find a wide readership, and will inspire others to create similar accounts for other significant places.