One of the harbingers of spring in the north country was Spaw Sunday. John Billingsley reports on a recent revival 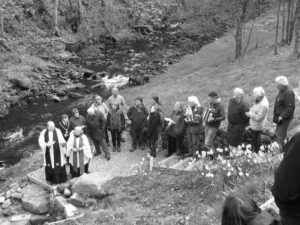 About 100 people turned up at Cragg Spa, in Cragg Vale, W Yorkshire, on Spaw Sunday (1st Sunday in May – in 2010 falling on Saturday May 1st) this year, to revive the old tradition of taking the waters. A blessing service was performed at the spa well, beside Cragg Brook (aka Elphin Brook), and the local vicar, Rev. James Allinson, sprinkled attendees with water from the well, with a sprig of rosemary. Proceedings ended with a yard of ale contest at the Robin Hood Inn across the road1. A set of steps had recently been installed, and the well itself improved with stone housing.

The Spaw Sunday tradition had previously been revived as a well dressing by the late Tony Heginbottom in 1987, but lapsed soon afterwards. In earlier centuries, however, the spa had been well known. The Rev John Watson described it in his 1789 history of Halifax Parish as “a spaw which contains a small volatile sulphur and light steel”; Watson also recorded a local custom of “adorning wells with boughs and flowers”, with attendant celebrations2, which would appear to have been similar to the Derbyshire well dressings. Local historian H W Harwood noted the local belief in the early 20th century that the water tasted different on Spaw Sunday than on other days3; in any case, the sulphur taste was generally disguised by licorice (known as ‘Spanish’) soaked in the water. Mr Major Wild reminisced about his childhood visits to the well in 1913 in a poem published in 19134:

I can read of Cragg Vale, and its once famous Spa

When as lads in our clogs and our smocks we did go,

When the bright month of May did appear;

With bottles and Spanish, over Heathershelf Scout…

Then we’ve raced down the wood to the mineral spring,

Filled our bottles, and then felt as proud as a king

The local paper reported on these Spaw Sunday visits in the late 19th and early 20th century5. On May 6, 1906, large numbers of visitors went along to the spa and 500 people proceeded to Blackstone Edge (another 5mls uphill – the Cragg Road, the B6132, is noted for rising 968feet over 5½ miles and contains the longest continual gradient in England) where the Hebden Bridge Band was playing at the White House Inn. The paper noted that ‘only 500’ went on to the inn, and that spa numbers were becoming fewer6.

One memorable visit, though not on Spaw Sunday, was paid by 50 members of the Halifax Musical Society on June 1st 1878. They remarked favourably on the quality of the water, had tea at one of the local inns, and went on to the valley Church of St John in the Wilderness7. The quality of the waters was not commented on so favourably by Peter Robertshaw remembering his visits in the 1930s – “they were an off-putting brown colour… what was worse, though, were the little worms swimming about in it…”8. 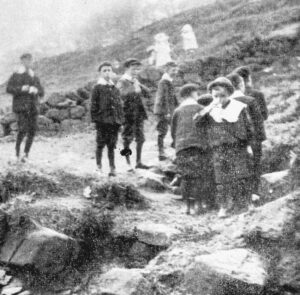 Spaw Sunday was marked at natural mineral wells across the country, especially in northern England, by attendances of local people; some wells built up a wide reputation and attracted visitors from a wider area, such as the Luddenden Dean Spa, also in the Calder Valley of West Yorkshire, where Spaw Sunday was annually observed for a number of decades and over its time featured preachers, brass band performances, Temperance Society gatherings and speeches on behalf of the Independent Labour Party. The Second World War, however, brought the declining attendances to a close.

This decline was surely part of the general drift away from natural medicine through the 20th century; the sulphur, chalybeate and other wells were generally considered to have beneficial virtues, but on Spaw Sunday the waters were also said to acquire enhanced healing virtues (per the above reference, Harwood might have said people could taste the difference). Some of the local springs, especially in the Halifax area, did become medicinal spas, and received medical approbation – the most famous was at Horley Green, which contained ferrous sulphate and was green in colour, despite which it attracted thousands of people on Spaw Sunday in the mid-19th century9. Another popular drinking spot was Wells Head, helped by the news of an old lady with poor digestion and worse habits, inclined to lie in bed until 9am and smoke a pipe till noon without taking breakfast – after two glasses, she threw away her pipe, walked briskly around the surrounding green and went off for a good breakfast10!

Taking the waters was part of what we might see as the spring detox regime of previous generations; after a winter of privation and poor nourishment, the mineral waters helped flush out the system and in many cases provided much-needed iron. Canon Henry Krabtree, curate of Todmorden St Mary’s Church c.1660-1690, noted other detox practices of his day, including for April “Purge, vomit and let blood, but abstain from wine and strong  drink, for it defiles the blood in this month more than in any other” and May, “Sage and Sweet Butter is an excellent breakfast. Claryfied whey, with Sage, Scurvy-grass, Ale and Wormwood Beer are now very wholesome”. Take up these options if you fancy, but remember Krabtree’s advice when it comes to October: “a good suit of warm clothes is worth two purges and one vomit. Keep warm betimes, for cold creeps upon men insensibly  and fogs oftimes beget a whole winter’s distemper”11. So don’t say you weren’t told. 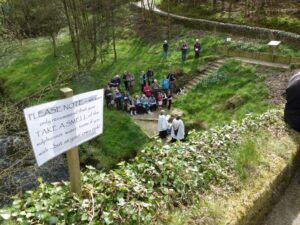 The blessing ceremony in 2012 (John Billingsley)

With thanks to Roy Collinge