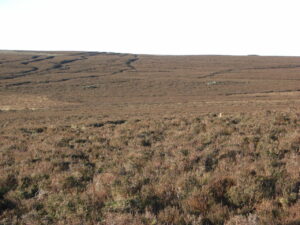 A Stone Circle on Midgley Moor

I came to live at Foster Clough, on the edge of Midgley Moor, in September 1970. I’d visited the area a few times, and I had gained a rough idea of local topography. I’d come to join a loose semi-commune of young people aiming to co-operate in the renovation of the half-derelict cottages. We were idealistic in various ways. Those were the days of the great Mental Hospitals. We felt we ought to be able to keep people with mental problems out of The Asylum. A friend, Ben, had moved into a farmhouse over near Wainstalls, and was looking after his brother, Barry, who was in a bad mental way: Paranoid Schizophrenia might describe it. Ben felt he couldn’t cope, and I agreed to see if I could do any better, and took Barry in. I was failing. Barry’s madness was driving me up the wall. His being out of communication brought me intense stress.

I was feeling particularly exasperated one day in November, when Foster Clough was wrapped in dense fog or cloud. I had an idea for my own therapy, my own peace of mind: I would climb onto the moor and get lost, and then find myself. I was confident enough in my general knowledge of the topography to believe that, wherever I came down off the moor, I could find my way home. So I set off into the dense mist.

I can’t say how far I travelled, in what lines or circles, nor for how long. To lose sense of time as well as space was part of the objective. The self-therapy seemed to be working: I was losing my anxiety about Barry’s state. Eventually I reached a point (somewhere) where I felt quite calm, and perfectly lost. From here I must find my way home.

I made my guess, and soon was heading downhill. There was nothing to be seen, but there seemed to be gaps within the mist. Then, of a sudden, glancing back and to my right, I had one of those spine-and-scalp-tingling moments (if my hair hadn’t been so long, it might have stood on end). There was a cluster of small humanoid figures – the word ‘dwarfs’ sprang to mind – staring at me. I did not want to lose the calm I’d gained, so I took a deep breath and turned and walked towards them. It was a great relief to find that here was nothing supernatural. It was a small, rock-solid, permanent, ancient stone-circle. I walked round the circle, touching each stone, and feeling an odd sort of reassurance.

Then I carried on down, and the mist was lifting, and very soon I could recognise certain features: the ruined farmhouse of Wicken Hill to my left; the Mount Skip golf course to my right, and I came down to Heights Road near the little bridge at Bessy House. From here I knew it was only half-a-mile to my house. I had lost my stress. Barry would have to be returned to his brother, and thence, no doubt, to official care, and I had discovered something really interesting. Nobody had told me that there’s a fine stone circle on Midgley Moor.

And, of course, there isn’t. In the ensuing weeks I scoured the moor, seeking the circle. I’d known Churn Milk Joan, but soon I was familiar with Miller’s Grave, Robin Hood’s Pennystone, Lad Law. I came to feel for the moor. But I had to admit there is no such stone circle on it. Oddly enough, close to where I believed I’d seen it lies the well-known turf circle of Wicken Hill, though that has a larger circumference than the circle I’d found, and the coincidence offers no real explanation. I could only class the experience in a box marked The Inexplicable. 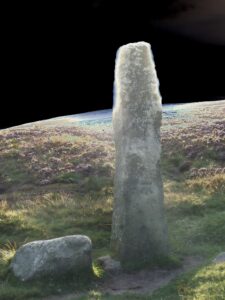 Shaky Evidence for the Boggart

The imaginary apprehension of supernatural creatures seems to be a universal feature of the human mind. They have many names, or, possibly, It has many names. A literary imagination like that of Tolkein might differentiate between their orders, and bring together different types in an imaginary world, but it seems plausible that each example is one and the same thing: the djinn of the Arabian desert, the pixie of Cornwall, the boggart of Yorkshire: each endowed with the qualities of local mentality and landscape. To reduce all to one is perhaps too radical, but perhaps a certain Spirit of The Wilderness, of the wild, the desert and the untamed places, is the simple mental phenomenon stalking and striking human minds across the globe. Mental, yes, but can it take physical form, animal, vegetable, mineral?

I put away my stone-circle experience in the Inexplicable box, but pursued an interest in folklore and the supernatural. Supernatural creatures have been a prime feature of poetic imagination, but to think that The Fairies have designs upon yourself could be a dangerous insane delusion. There’s a fine path to tread between credulity and incredulity. I became familiar with the idea of The Boggart, as a name for the spirit of the wilderness in these parts. I could suspend disbelief, and discover the boggart in clouds in certain atmospheric climates; I could discern its face in rocks or the bark of trees (and once in the burn-marks on the bottom of a pan, which is how I learned its name in Ancient Greece); but I knew I shouldn’t take these thrilling experiences too seriously or personally, and that they provided no true evidence for the actual existence of The Unreal. I found that ‘the boggart’ was known to be a shape-shifter and a trickster. Eventually it occurred to me that the boggart could have put on the stone-circle show especially for me. How like him (if he’s a he) to have reassured me with the solidity of the stones, and to have brought me back to sanity, only to whisk the whole show away!

But that’s not common sense. It doesn’t release the bogey Jack from the box labelled Inexplicable. Nor could I swear to my odd experiences on Midgley Moor in a court of law.

There’s another event, though, I might report. Thirty years later I was up in the Scottish Highlands. I had climbed a mountain called Meall Fuar-monaidh and come down to a small lake or large tarn called Loch nam Breac Dearga, and was in the treeless Balmacan Forest. It was a hot bright August day, but with fierce gusts of cooler wind. There was no sign of any human life at all. As I stood by the stream that issued from the loch, I thought, this looks like a spirit-of-the-wilderness spot, and, certain that no-one could witness my folly, I stretched my arms and shouted out, as loud as I could: “Come! Spirit of The Wilderness! Show Yourself!” and sat down, amused with myself. Then I noticed a white band advancing fast towards me across the loch. An extra-fierce gust of wind was picking up tons of water from the surface of the loch, and, the next moment, it deposited the lot upon me. I was thoroughly drenched, and the knapsack containing my lunch was sunk in the stream, twenty yards behind me.

I’m not saying that I’d not have been soaked if I hadn’t shouted out, but I did and, by coincidence, I was, and I’d think twice before trying the same trick again. It was a good drying day, and no real harm was done.

There’s one non-supernatural account I’d like to append. I’ve talked of boggarts in the pub, so folk are inclined to disbelieve my more unlikely tales when they’ve been certainly true. One early morning in the early 21st Century, up on Midgley Moor, I shared a stare with an extraordinary creature, not five yards away. I took it to be some sort of mammal, like an incredibly huge squirrel with a long-nosed face. After our transfixed staring-time, it bolted, hopping at great speed towards and past me. I looked in books at all the European mammals, but there I found nothing like it. Then someone suggested ‘wallaby’, so I looked that up, and there it was, the same creature, exactly. Wallaby. Now, there are known to be some wild wallabies in the country, but I’ve heard of no reports of them from Midgley Moor. This was probably some unlucky maverick, fated to fail to mate. I’d say I’m 100% sure I’ve seen a wallaby on the moor, but as years pass without other confirmation, there is a 0.5% whisper that suggests that if The Boggart can appear as a stone circle and as a gust of wet wind, why not as a marsupial?