Places predate monuments; monuments imply a concrete materialisation of narratives that over time becomes more codified – the narratives become myths, become scriptures etched on to place. Journeys between places infused with narratives become less nomadic, more pilgrimages. Dominant cultures are taking shape, and represented on a landscape; alt-antiquarians need to note that the objects of their interest are involved in a proto-politicisation of place, but that does not negate the appeal and inherent numen of monumentalised liminal places, nor the urge to liaise with their meaning as places, nor their interest as sanctified locales. But they are points in the emergence of social structures in a process that eventually leads us to Debordian psychogeography.1

I think it’s fair to say that Merlin Coverley is a psychogeographer who privileges the urban viewpoint, but he acknowledges, if grumpily, that some of the founding personalities of the alt-antiquarian field need to be included in the historic spectrum of psychogeography. Alfred Watkins, for instance, who was the first to suggest that the British landscape is criss-crossed by straight alignments and trackways which he termed leys,2 is widely regarded as a key catalyst in the development of earth mysteries, aided by John Michell’s popularisation of his hypothesis.3 Coverley claims that only where Watkins describes urban examples does his ley concept intersect with psychogeography, citing such 20th-century urban figures as Sinclair and Ackroyd – though this column’s previous two articles have given reasons why he’s simply wrong on this. Coverley acknowledges however the “visionary strand of a specifically English tradition … [celebrating] the genius loci in … the otherworldliness of the English countryside”, even if he chooses to reveal his predilections by dismissing it as New Age and pseudo-scientific. This stance is clearly at odds with the wider understanding of psychogeography and its implications, and indeed of the phenomenological depth of place that has developed since his handbook was published in 2006.4

Coverley has a point about some of the post-Watkins developments, however. The reach towards subtle understanding of place, assessing esoteric as well as exoteric associations, is an approach that was present in the early ‘earth mysteries’ field of the 1970s. The 1980s saw an unfortunate fascination with earth energies and networks that some commentators later in the decade realised was little more than seeing the Earth as a version of circuit-board technology; simultaneously, the materialist implications of this perception and other developments in archaeology fostered a ‘soft’ outlook countering such materialism with a mystical and belief-centred neo-pagan/New Age mindset (which Coverley for his own reasons chose to privilege out of an approach that was overall more balanced and nuanced). Both polarising shifts can be interpreted, however, as affirmations of the dominance of media-led immediacy – Debord’s Society of the Spectacle. The Spectacle is out there, now, an engineered event which turns us away from an understanding of past and local cultures, as well as our own located place in the present.

The new antiquarian, in observing how paranormal events may cluster in a certain place, or how a megalithic site is just here not there, firstly needs to acknowledge the primacy of the place, not the event. The frequency of accidents in a certain area of road, for example – are they just lack of care, or some temporal visual dislocation or confusion in the terrain?5 What’s more important at an ancient site – the circle of stones, or the way the sun or moon launches itself off a certain hilltop, or how a certain constellation of stars appears framed by the horizon at a certain time of the year, only visible from that place? What’s more revealing about a place legend – that it was first documented in 1786 or that it exists and is passed on at all?

Place is the instigator of response; without it, and the eyes and senses to appreciate it, there is no subject matter for antiquarian study. As an ever-present stimulus, it kickstarts culture and inspires local differences. The response may be exoteric – mundanely, where the looming sides of a deep valley impress a certain visual constraint, or at the opposite end of the scale the expansive skies of a plain free the vision from such constraints; each brings consequent worldviews and psychological perspectives. Or at a deeper level, where the shape of landforms suggestive of giants reclining along the horizon or evocative faces characterising rock outcrops and natural growth foster perhaps an ancestral association with the landscape. Or it may be esoteric – some special hard-to-quantify numinous character of a specific location that sets it apart, like the Dreamtime stopping places in Australia’s indigenous culture. We may vaunt our sky gods or our intellect, but at their root lie the Earthbound places by which we measure them.

Place is also essentially layered, or sedimented; in one spot lie the accumulated phenomena of its experience that excavators can access vertically. There is an implication to this that involves time, for at any given moment all these layers of place are simultaneously layers of time, and therefore are occurring in place simultaneously now, and in times to come.

So the antiquarian ethic is also activated by present experience. A view on the past is an exploration of a series of ‘might have beens’, stacked vertically and simultaneously. It’s said that Britain’s history is a history of invasions – I wouldn’t go that far, but the archaeology does show us a history of profound culture shifts and differences, some of which were caused by population displacements. What would have happened if this set of people hadn’t been displaced, if this other set of people had succeeded in becoming dominant? We see the landforms people held to be significant, we recover images of their deities, we can enter their ruined houses, we can explore their monuments, we can piece together some of their rituals – and we are led to different worlds within this one, so many lost pasts, so many lost futures, all dormant within landscapes. All potential within “the otherworldliness of the English countryside”, though unlike Coverley I wouldn’t restrict wyrd landscapes to England.

The alt-antiquarian perspective conjures a way of being in place, an eye for such temps perdu; it reaches out to the 18th-century antiquarian William Stukeley, or the 20th century Alfred Watkins reassessing the past; to Arthur Machen, to Alan Garner, to Phil Rickman, to Peter Ackroyd, and others who explore lost times in fiction; to folly-builders, to film-makers who imagine that somewhere in these islands some of that lost time is still working through its destiny. The alt-antiquarian can learn to interact with places as with a séance.

“Haunting happens”, writes Mark Fisher, “when a place is stained by time, or when a particular place becomes the site for an encounter with broken time”.6 Hauntology is another point at which the neo-antiquarian, the earth mysterian, the phenomenologist steps aside from the Spectacle of landscape and finds themself side by side with a psychogeographer, exploring how our ancestors might have seen and worked with a place, and allowing that place to vouchsafe a clue or two. 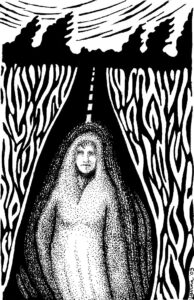