Last time, our alt-antiquarian found themself side by side with a psychogeographer, contemplating the landscape and its variant pasts, real and spectral. And, our psychogeographer will point out, some of those pasts we imagine today are well-managed, staged dramas for a populace weaned on screened stories.

There have always been varieties of history – earth mysteries grew out of a challenge to the static, materialist and top-down perspectives that were rife in the 1960s and 1970s. That challenge took some adherents down some fairly odd wormholes, admittedly – cul-de-sacs where some of them still can’t find a way out. I imagine somewhere there are people who believe 5G phone masts need to be burned down because they’re Machiavellian Deep State interference with the ‘ley lines’.

Well, says the psychogeographer, the world is certainly being messed with, and it’s certainly a power game, but the wormholes don’t take you anywhere useful in recognising that… The allotment of space in a landscape has always had a power contingent, expressed religiously or politically – from the construction of megalithic monuments, to the centralising power of the Church expressed through mediaeval parishes and hierarchies, to the Enclosures of the English and Clearances of the Scottish landscape.1 Traditionally, power has been associated with private property, i.e. land; today, ‘my patch’ still calls up a mentality of protection against others, but in a ‘democratised’ individualistic form that is seeing public rights of way being blocked, closed or rerouted all over England (particularly virulent during this CV19 crisis through the manipulation of paranoia). But at society level it is less about simple ownership of land than about its deployment as a resource for public entertainment, at a price – not so much private property, but privatised property, the permitted and framed use of space. It would be helpful to look at how power is expressed through place in the mundane world before imagining science-fantasy scenarios.

The presentation of history – and much else besides – has changed since the Second World War, not unconnected with the trend of Western capitalism. In 1967, Guy Debord, the founder of the Situationist movement, identified a drift away from authentic human experience into its representation – “the decline of being into having, and having into merely appearing“.2 In this context, we are presented with scenarios into which we opt (or not), and options are expressed through commodity. The development of mass media and then the Internet have intensified this trend of commodification, to the extent where ‘brand awareness’ or ‘loyalty’ – the construction of a desired identity and lifestyle through the consumption of certain brands – is a standard part of social personae. We have been inducted into what Debord called the Society of the Spectacle: the new colonialism is that of the commodity – the colonists are the same as ever they were, big business, but in a global world we are all the colonised, and we seem to take to it like ducks to water. Commodity has gone from being primarily material and aspirational to aural/visual and immediate. Like The Truman Show, our lives are embroiled in Spectacle, provided for us by an eager-to-please corporate and political network; unlike The Truman Show, there’s probably little actual conspiracy about it, just the inevitable dynamic of a juggernaut that’s slipped its gears.

So, we might ask our Situationist-inspired psychogeographer, what’s that got to do with the history and folklore that we’re following in so maverick a fashion? The answer, of course, is that history, too, has been commodified and inducted as Spectacle. Once, “history was knowledge that should endure and aid in understanding, at least in part, what was to come… In this way, history was the measure of genuine novelty”, i.e. change over time was apparent, and gave us a chance of witnessing it as it is made. But in a context of consumer capitalism, “it is in the interests of those who sell novelty at any price to eradicate the means of measuring it”.3

The remark about ‘selling novelty’ is key in two ways: except in specialised groups like archaeologists (and, I would hope, NE readers), time, already slippery as it recedes into an amorphous past, is losing its depth. Most of us experience history not through a history book, but maybe through a tourist guidebook, Trip Advisor or a TV documentary – ready-digested and repackaged for our convenience. History becomes a collection of highlights packaged in such a way that one doesn’t have to devote much time and effort beforehand or even after, as long as one’s phone or camera is properly charged. It becomes accessible not through a particular interest but through advertising as a ‘must-see’, and businesses respond to the demand thus created via mass tourism. History is thus doled out as a series of products and its experience marketed as essential ingredients in a life’s journey. The more spectacular a site, the greater its commodity value; clearly this approach places the remains of history solidly in the domain of the Society of the Spectacle, and typical tourist marketing can throw together in a single day in Wessex, say, the Neolithic, Bronze Age, and Middle Ages (but probably ignore the modern military use of the landscape) – all this time telescoped into a single full-throttle experience. The Spectacle obfuscates the past, makes it immediate and fleeting, appropriated by the dynamics of both the consumer economy and elite empiricist versions of history, delivered without contention in a succession of what Trump might call ‘alternative facts’.

Recent years have taken this remodelling of the historical experience even further. Now, for many tourists the correct thing to do at a spectacular site is to turn one’s back on it, raise a smartphone and take a selfie; the original spectacle has become a backdrop, and the photographer has borrowed it to make themself the spectacle instead, with a handy stage set behind. Thus, the historical information of the spectacular site – the here – is erased, subordinated to the only time that is valued, the now; the appearance rather than experience of culture takes centre stage in a personal drama that is irrespective of time. Imagine that psychogeographer beside us talking to the selfie-taker: ‘Very nice. But who created that statue, and when?’ ‘Yes, yes, but see how it looks like I have my finger up David’s nose!’. The spectacle of history is complete; all the information encoded into the must-see cultural item is subsumed into a simple code: ‘This is me, possessing this moment of time, and here is my proof’.

Of course, by the time it gets to this stage, it isn’t history that’s being sold – it’s heritage, and everybody has read of the heritage industry. Who’s ever heard of the history industry? Heritage, a cosmetic of cultural sensitivity, is what happens to history when it becomes commodified. It’s good for national economies who can’t keep up with the developed behemoths, so it needs to be conserved, not just because of its value to humanity (which I’m not being cynical about) but because it’s a marketable commodity; and if a place can be registered on the World Heritage list, it’s bingo time – the list is after all a list of places that are amenable to commodification. 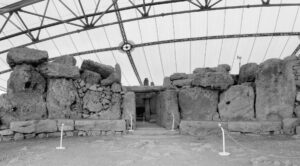 Mnajdra, Malta, wrapped against the elements Naturally, there are conditions attached – preservation must be state of the art. Sites begin to bristle with equipment, acquire unexpected roofing (my mind goes to Mnajdra and Hagar Qim temples in Malta as exemplars of these necessary but dispiriting blights) . And fences too, naturally – distances must be kept between the spectator and the spectated in order to maintain the pure experience of spectacle. Spectacle is further enhanced when entry prices shoot up once a listing is achieved (£19.50 for Stonehenge, 35 Eu for Hal Saflieni Hypogeum, Malta, at time of writing, which maintains economic differentials to access and the commodity value of the Spectacle).4

Well, that’s modern tourism for you, and I can’t say I’m innocent of it.

1. See John Billingsley, ‘The City & the Country: Psychogeography as we see it’, NE150, p13-18. https://northernearth.wordpress.com/index/the-city-and-the-country/

2. Guy Debord, The Society of the Spectacle (various publishers) #17

4. I don’t disagree with admission charges, I just note that they indicate the level of commodification the site has undergone.