The last column addressed the commodification of history as Spectacle; well, that’s modern tourism for you, and I’m not innocent of it. But the Society of the Spectacle is also at work in much humbler surroundings. In our last issue, a reader wrote in to lament ” Time was when it was possible to visit a special place – a well, a spring, a stone, a stand of trees, an ancestral corner, and find it in pristine order; it would be impossible to tell whether or not people had visited it, performed a ritual, or whether it was untouched…”.  She was responding to NE161’s news on the destruction by fire of the ‘heritage tree’ (if I may say such a thing), the Whiteleaved Oak.1 The fire is believed to have been started by a candle left suspended, alight, from a bough in the ancient tree, one of a gallimaufry of items left as sincere if unthinking votive activities by, one supposes, pagan or New Age adherents. An explosion of tat at a sacred site is of course one thing that would never be allowed at a managed heritage commodity; but where there are no fences it is something that is now a standard feature of the kind of sites that NE is interested in. 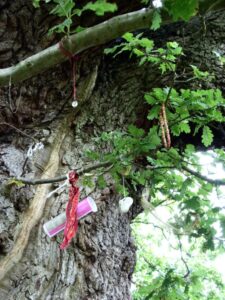 There are rag wells, coin/nail trees, wishing-well traditions in Britain, of course, but by and large our Protestant history had already decimated such shows of feeling; where they did occur was as deep-felt personal prayers, using degradable cloth or potent metal – not votive behaviour so much as functional, not offering so much as symbolic sacrifice. It is difficult to argue that the contemporary practice is a revival of old tradition; it is an assumed trope of behaviours ‘borrowed’ from other cultures via tourism, globalised information or New Age /neo-paganism playing pick’n’mix with folklore.2 Many such customs may still be found in Roman Catholic countries, and quite possibly in pre-Reformation Britain, too, only to be vilified theatrically and not entirely accurately as ‘pagan’ by fundamentalist Protestant theologians in the 16-17th centuries; it is surely ironic therefore that today’s pagans should have revived them here as modern pagan practice – what our psychogeographer friend, though still unmollified from the observations in our previous issue, would have to admit is a classic case of détournement…3 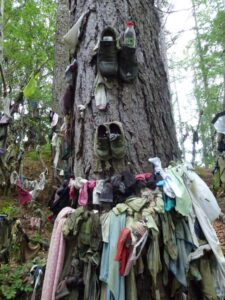 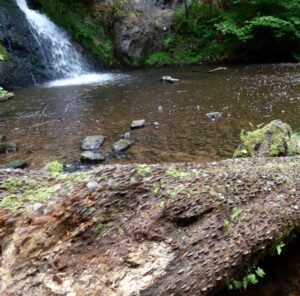 But more to my point here is that all too often this tat has been purchased or designated especially for the site thus festooned, and generally for display rather than need. The votive offerings are commodities, and the site thereby commodified – the literal example is perhaps the confusion of principle expressed in the new coin-tree tradition (see Reviews section). The various tinkling, flickering, flapping objects are designed to make an impact on the visitor rather than the site and its numen (indeed, the impact on Whiteleaved Oak or Juliet’s Tree in Verona was fatal to the poor tree). Hence, sincere neo-pagan or New Age ‘adoration’ has only succeeded in creating the Spectacle from a site that should be inherently counter-Spectacle. As Homer would say (not that one), ‘Doh!’ The process is arguably similar to the way in which processions to a place of public execution, like Tyburn in London, became performative acts of retribution in which the people were invited to participate, with heckling crowds and food stalls all part of the commodified Spectacle. In the process, the circumstances by which the event came to pass became subsumed in a performance divested of time and meaning; the image of the dangling corpse became the votive proof of presence and participation. 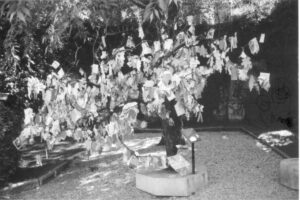 So as people who seek to approach ancient sites and traditions from a perspective outside orthodoxy – as alt-antiquarians –, let’s not fondly pretend that our subject area, or even a more religious/spiritual engagement with it, is free from political implications. Today, more than ever, and even since the early days of earth mysteries 50 years ago that Mary recalled, our perceptions and actions are being distilled through the dominant paradigm, a hegemonic consumer capitalism screening us from unmediated uncommodified experience.4 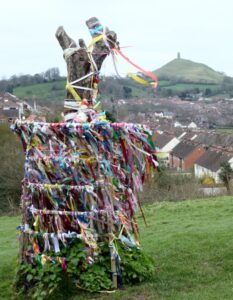 1. Mary Clacy, ‘Having Your Say’ NE162.’Take only memories, leave only footprints’, NE161, p33. Mary may equally have been referring to another article we’ve run, ‘Is tradition a load of rubbish?’, NE152, about how a clootie well on the Black Isle in Scotland has sprouted such a wealth of unbiodegradable litter that it resembles a refugee camp (or for that matter the aftermath of Glastonbury Festival).

2. I suppose the ‘woke’ amongst us might also suggest this is surely cultural appropriation.

3. détournement: The Situationist/psychogeographical technique of subverting established ideological meanings by redirecting their implications.

4. Without allying myself with the various conspiracy theories that muddied the political waters in 2020, it has to be said that Covid-19, with its massive shift to online experience including shopping, hasn’t helped.