“We shall not cease from exploration…”  Eliot’s advisory for perception. 3

We have been talking of the past, and of the present, and of the hauntological membrane of experience between them. That membrane is of course unanchored, timeless, a hiatus between the twin towers of objective evidence and lived documented experience. Between the two lies a storied and fluid landscape populated by entities of our own making: from the more or less reasonable entities like folklore and oral history, through to the fractious and muddled boggarts of wishful thinking, ethnic assertions and populist pride. Magical pathworkings always instruct the querent to seek a guide through a spectral landscape − but just imagine if the guide you happen to meet is that QAnon shaman who made a less than inspiring appearance in the last article! Or someone like him, like one of those British National Party stalwarts following the party manual and reviving a lapsed folk tradition thinking they can gain traction for a revived ethnic nationalism. How many people have we each met, extolling the especial virtues of British/Celtic megalithic sites? The reason NE runs articles on megalithic and sacred sites overseas is not to encourage readers to worsen their carbon imbalance by flying off to see them, but to counter the myth, common in alternative archaeology as well as neo-paganism, that the British Isles are somehow particularly hallowed. We are not the only Isles of the Blest, and even if we were, getting on a hubristic high horse about it wouldn’t really maintain our halo.

Gangs roam any contested intellectual landscape, seeking associates and looking for any sign of an inquiring mind being tempted to settle for one thing or another, of inquiry becoming opinion becoming in-group identifier. Our revisionist antiquarian field was founded on the awareness that history is susceptible to more than one interpretation, and that questions need to be asked, and asked again. Even earth mysteries has evolved its orthodoxies and its lobby groups, united by notions of rightness; those of us involved in the field have all had to find a path through this zone where the guides we meet can be treacherous or sometimes just boringly intense and egotistical. We hope, of course, to arrive at a place where the view is, at least, less obscured. And the best journey to there is one where the views change sequentially as we travel, a vista opening here, a panorama there.

The phenomenological side of me, insofar as I understand the concept, rather likes a definition by Max van Manen, one that might particularly appeal to the alt-antiquarian, whose study is inevitably bound up with a sort of enquiring nostalgia: “Phenomenological method is driven by a pathos: being swept up in a spell of wonder about phenomena as they appear, show, present, or give themselves to us. In the encounter with the things and events of the world, phenomenology directs its gaze toward the regions where meanings and understandings originate, well up and percolate through the porous membranes of past sedimentations − then infuse, permeate, infect, touch, stir us, and exercise a formative and affective effect on our being”.1 This seems to speak to the awe which the Earth and the significant sites of our forebears arouse in us, and simultaneously the sadness that so much is already lost and more yet likely to be lost in our continuing exploitation and disregard of our planet and its needs. The pathos lies in, for me, the awful realisation that no one needs to discuss and excavate prehistory when the planetary infrastructure has other far more pressing priorities; and that we could, just could, be in the closing stages of antiquarianism and much else unless we (some more than others) lighten our load on the planet. 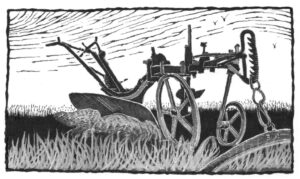 (ill. Davina Ware)
But let’s stick with the wonder of ignorance for now, and think of our encounters when we walk. Not just with people, but with the objects that mark human presence, whether an enigmatic menhir on the moor that demands a story, or a rusting pile of iron in a corner of a field whose meaning is indecipherable to the modern urban eye, or to the sudden realisation that one is looking over a landscape that has been congealed at one time or over time into a palimpsest of meaning that, with a mind open to possibilities, one might just manage to interpret, or construe into a diving-board for the imagination. This is of course not limited to historical phenomena, nor to rural environments. It is something we do every day to some extent, especially when exploring new places. Children as well as adults do it in explorations of their hinterland. By so doing we construct cognitive maps of a place’s physical presence as well as its textures, moods and secrets. All this was expressed even by the materialist Marxist psychogeographer Guy Debord, who observed “The sudden change of ambience in a street within the space of a few metres; the evident division of a city into zones of distinct psychic atmospheres; the path of least resistance that is automatically followed in aimless strolls (and which has no relation to the physical contour of the terrain); the appealing or repelling character of certain places…”2. This is the world “not known, because not looked for, but heard, half-heard, in the stillness between two waves of the sea”.3
These are all denizens, material or abstract, of the hauntological space where we began, and leaves us at a juncture of existential perspective by which neo-antiquarians lurking in the fringes of materialist objectivity, do psychogeography as wonder-full phenomenologists. We do it also as folklorists, looking behind testimonies of experience. We do it as forteans, seeing through spectres and anomalous phenomena to a palimpsest of place memories and impressions. We might, if physical abilities allow, do it as conceptual flâneurs, by importing the ancient world into experiences of the modern landscape. And we will do it as cartographers, of local cognitive maps and of the human perceptions that unite all human experience, in the face of infrastructural development that induces forgetfulness of the depth of history and culture. An alt-antiquarian lens can be a way of merging the layers accruing to place, and re-presenting the whole notion of where we are.
Notes
1. Phenomenology of Practice. Left Coast Press 2014, p26.
2. ‘Introduction to a Critique of Urban Geography’, Les Lèvres Nues #6.Paris, Sept. 1955.
3. T S Eliot, ‘Little Gidding’, Four Quartets.
Published in NE166, December 2021, pp.22-23