Paul Screeton asks, quite reasonably, what’s the editor on about? Modern understandings of the past, says the editor…

What to call ourselves collectively is a topic which not only has its peaks of discussion while forever in flux, but also there are also elements of cultural tracking. Neo-antiquarianism distinctly takes inspiration from a bygone age. Psychogeography could have been deliciously descriptive with its blending of landscape and human perception (obsession and even madness?), but it became tainted with a sinister political trickster resonance from its Situationist/Marxist/anarchist 20th-century hijacking. Geomancy was vigorously promoted by the late Anthony Roberts and Nigel Pennick, but that smacked of fortune-telling soothsayers.

NE’s editor provided a list of alternative terms in NE 159, but missed probably the best of all, hermetic topography. It was coined by Bill Porter, a scholar with a formidable intellect and who published little, but corresponded prolifically with other earth mysterians during the 70s. He was drummer with Village (which included Peter Bardens, son of anthologist Dennis, and who went on to form Camel). Landscape is represented by topography and purpose by the classical era reference to Hermes and Mercury, so suited to our prehistoric quicksilver heritage. That’s my choice.

Earth mysteries encompasses much and is probably both focussed and wishy-washy at the same time, a catch-all created by an unknown sub-editor in the mists of our subject’s antiquity itself. EM equals leys, Stonehenge and some pseudo-magnetic power flowing in the landscape, if even marginally grasped; similarly flying saucers equate with extra-terrestrial craft and ufologists as eccentrics who hold skywatches. As for alt-antiquarian. This is anathema to me. Politically, ‘alt’ echoes the American extremist alt-Right as a pejorative term embracing a rabble of kooks, conspiracists and racists, right-wing and wrong thinking.

Whether political activism or affiliation applies to our subject, it is merely secondary to the consideration of best nomenclature. To many, ‘alt’ has political overtones, whether it be the unsettling American alt-Right or the mystic nationalism of the European New Right (where the late esotericist John Michell caused some disquiet and attracted a new strand of followers). Summing-up, alt-antiquarian suggests ‘alt’ as either nebulous or politically dubious, and ‘antiquarian’ as too fuddy-duddy. Maybe John B could throw the floor open [again? JB] and see if a specific term to encapsulate all aspects can be achieved by the readership? 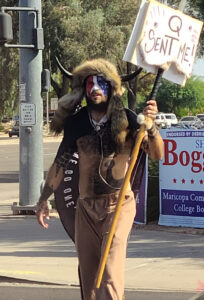 NB: This is a plonker, NOT an alt-antiquarian!

The Alt-Antiquarian (JB) replies: I’m glad Paul has given me a chance to explain my thinking behind ‘alt-antiquarian’. I’m not recommending alt-antiquarianism as a new handle; I’m just using it to suggest other perspectives and syntheses on this long-established field of interest that may, I hope, help to shift some ingrained assumptions and underline the need to always look critically at intellectual fads in any field.

The prefix ‘alt’ simply denotes, of course, ‘alternative’, and while I concur with Paul that the alt-right movement has been all too much in the public eye of late, I took the usage from the alt-folk and alt-country music genres which to my mind have been around a bit longer. In those genres, the usage implies taking an established mode and coming at it from a left-field direction, challenging but respectful to the established mode, i.e. tending towards a more counter-cultural take on their field. I suppose the alt-right might make the same claim, but in general they come across to me as the same brutish thugs that the right has always specialised in.

This understanding of ‘alt’ seems to me very appropriate to the field we sometimes still call earth mysteries and more often neo-antiquarianism, but adds a level of engagement that I do not think the other terms embody. Earth mysteries has splintered like a broken mirror into a catch-all that too often simply reflects wishful thinking and certain belief systems rather than a research field open to flux.

I am also wary, after nearly 50 years in the field, of perspectives that focus too much on looking back in wonder or on framing the past in the view of the present. We all know how the interpretation of prehistory has often depended on extant social assumptions − the savage Neanderthal, the sage but murderous Druid, etc. − and we have seen similar in our field: orthotenies of the 1950s reflecting the UFOmania, the energy grids of the 1980s that resemble motherboard technology, the jetset ancient mystery sleuths of the 1990s reflecting the burgeoning globalisation of the heritage industry. These are all, it seems to me, emanations of the Spectacle, a collapse of timescales and cultures into a single graspable but untethered Nowness of awe. This why we need an ‘alt’ approach − to take what has been established in research in our own and other fields, and ask further questions of it.

Often, as the phenomenologists will tell us, those questions will address a human factor. Every built or acknowledged significant place of prehistory, history and even the present exists within a society and a culture; every society and culture we know has a political dynamic of power and belief that influences their creations. Politics is therefore a factor in their making, and equally is a factor in how we ourselves view them.

Psychogeography wasn’t hijacked by the Situationists; they coined the term, and placed it within a context of challenging established patterns of geography and thought that seems to me very similar to the founding visions of earth mysteries. The Situationists articulated a crucial prognosis: that post-war capitalism is a project of furthering consumerism beyond ‘goods’ to intellectual and cultural property − like history, construed as de facto distraction rather than information. One result is that opinion becomes confused with actuality. Why the Situationists should be any more sinister than the all-too-influential Farage and Rees-Mogg rump of UK politics is beyond me.

Excuse me taking many more words than Paul did!