It was 21st March 1972. I was hitch-hiking with my girlfriend around the Dales. I wanted to show her round the Malham area, but we arrived late in Malham village, with very little money between us. We walked up toward Gordale Scar by the river and I espied what looked like a cave by the side of a waterfall known locally as Janet’s Foss. 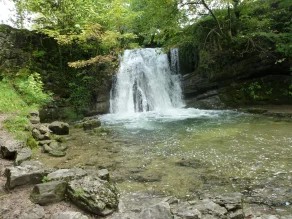 We clambered up into the cave and got as comfortable as we could in our big ‘army greatcoats’, so fashionable at the time, and huddled together for warmth.

Later in the night I awoke to the sound of what I can only describe as ‘celestial singing’ coming from the back of the cave. It was still dark with a hint of pre-dawn, in the early hours of the morning.

I disturbed my girlfriend; she awoke and she too could hear the same ‘music’. I can recall that it was like the sound of many voices singing harmoniously with depth and meaning, yet no language I could understand.

We were both startled by this experience and didn’t know how to respond. Now both awake and cold from the night air, disquiet got the better of us and we decided to leave the cave.

Much later I read that Janet’s Foss is known locally as a fairy site, and the cave as a ‘fairy cave’.